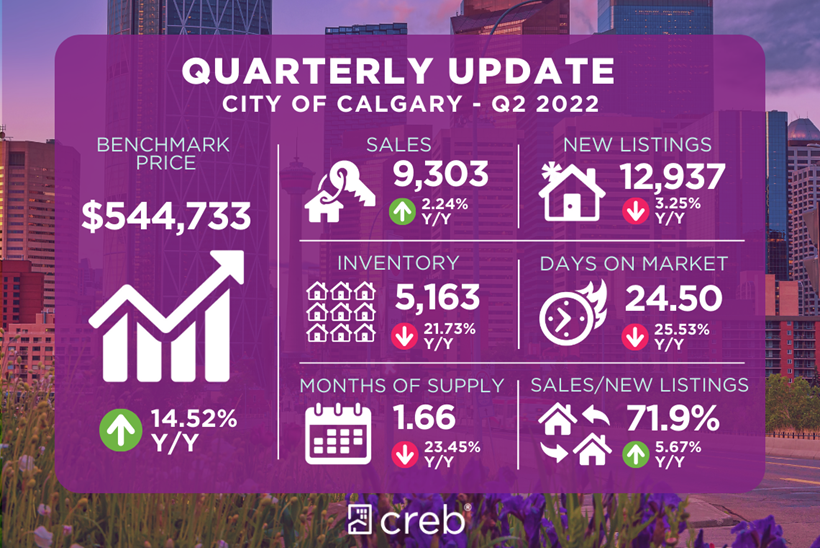 Within the city of Calgary, housing sales totalled 18,694 units in the first half of 2022, with sales in the second quarter nearly matching the record high pace set in the first quarter of the year . This doesn’t come as a surprise as consumers were eager to get into the market ahead of rate gains while they still had low pre-approval rates . At the same time, new listings struggled to keep pace leaving inventories relatively low and the months of supply relatively tight . This resulted in prices trending up in the second quarter relative to both the previous quarter and year . Since April, the Bank of Canada has taken an aggressive stance against inflation with their most significant move in July, which saw a one per cent increase . After four consecutive rate increases, the overnight lending rate has jumped to 2 .5 per cent and pushed mortgage rates up to their highest levels in over a decade . The lending rate increases have started to impact home sales and are expected to weigh on sales over the second half of the year, offsetting some of the strong gains reported over the first half of the year . Supply adjustments in the market have been slow, especially for lower priced products . However, the pullback in demand is expected to help support more balanced conditions . With market conditions easing and a higher cost of borrowing, prices are expected to trend down in the second half of the year, offsetting some of the stronger than expected gains in the first half of the year . Despite the pullbacks, we anticipate that the annual benchmark price will remain higher than levels reported last year .

The sudden and steep rise in lending rates has many calling for a significant correction in the Canadian housing market. While forecasts range, there are calls on peak (spring 2022) to trough (end of 2023) price adjustments that have ranged from declines of 10 per cent to over 20 per cent. There is some consensus that higher lending rates are slowing demand and causing a shift to more affordable product. There is also agreement that the degree of pullback will depend on location. However, one thing that often gets overlooked is that the price retractions expected will not erase all the significant gains that occurred throughout the pandemic. Because Alberta did not experience the same level of price gains seen in British Columbia and Ontario, the level of price correction is not expected to be as significant. Another key factor is higher energy prices generally result in a stronger provincial economy which will offset some concerns surrounding a recession. Nonetheless, lending rates are an important factor in housing and the relatively steep rise over a short period of time is still expected to weigh on demand and prices over the second half of the year.

Concerns over inflation and rising lending rates have many economists highlighting a risk of recession. While the rates gains will not entirely solve inflationary pressures due to global supply chain problems, the gains are expected to dampen domestic spending allowing supply to catch up with demand and preventing a situation where inflation becomes entrenched. The recessionary risk highlighted is based on a greater than expected retraction in demand. When it comes to Alberta, there is less concern of a recession as rising energy demand and prices have been a benefit for our economy. The higher commodity prices are expected to push Alberta back up to one of the fastest growing economies in the country. While economic prospects are better in our province, we still face inflation challenges and the impact on lending rates and the housing market. With a mandate to control inflation, the Bank of Canada has gone through four consecutive rate hikes, with further gains expected in September. The speed and magnitude of the rate gains will have a near term impact on housing markets in our province. However, stronger economic conditions supporting job growth and population growth will help offset the impact of higher rates and prevent a more severe downturn in our housing market. Population In Alberta, we have seen a turnaround in interprovincial migration with the highest first quarter levels recorded since 2015. Most of the increase seen was driven by people coming from Ontario. Job growth and our relative affordability is likely supporting this recent shift in interprovincial migration.

Employment Calgary has seen the creation of over 60,000 jobs from the start of the year to July, decreasing unemployment rates to levels not seen since 2014. While some of the gains have been driven by a reopening of the economy, the largest source of growth has come from gains in professional, scientific and technical jobs. Lending Rates Aggressive rate hikes by the Bank of Canada have caused lending rates to rise to the highest levels seen in over a decade. With inflation still a concern, further rate gains are expected in September.

Higher lending rates and supply challenges at the lower end of the market started to impact demand for detached homes in the second quarter. Sales activity slipped relative to activity in the first quarter and levels recorded last year. Much of the decline was driven by a reduction in sales for homes priced below $600,000, which also reported significant reductions in new listings. The pullback in sales relative to new listings did support some modest quarterly gains in inventory levels pushing the months of supply back above one month. However, with less than two months of supply in the market, conditions still remained relatively tight causing further price gains. Rising rates are expected to have the most significant impact on higher priced inventory in the detached market. However, much of the adjustments will start at the upper range which is better supplied than the lower range of the detached market, where there is still a lack of supply relative to the demand. Overall, we continue to expect that sales in the detached market will slow in the second half of the year and prices will trend down from the high point of the year, resulting in a slower pace of growth on an annual basis.

Similar to the detached sector, semi-detached sales eased in the second quarter relative to both the record pace set in the first quarter of this year and the Q2 record high achieved last year. While sales did trend down, levels still remain well above long-term trends. Easing sales were met with a significant pullback in new listings, ensuring that the sales-to-new-listings ratio remained relatively high at 76 per cent. Persistently tight conditions continued to place upward pressure on home prices in the second quarter. As we move through the second half of the year, we expect to see some adjustments in this sector supporting more balanced conditions and slower price growth.

Thanks to both a boost in new listings and the relative affordability of row/townhouse product, sales activity in the second quarter reached a new all-time record high. The growth in new listings was enough to support some movement from the exceptionally tight conditions recorded in the first quarter, but with a sales-to-new-listings ratio of 78 per cent and a months of supply of 1.38 months, this segment of the market continued to favour the seller. The sellers’ market conditions continue to place upward pressure on home prices with another quarterly gain of over seven per cent, contributing to year-over- year growth of nearly 17 per cent. This segment of the market is expected to continue to benefit from relatively strong demand coming from those looking for affordable housing options. However, as supply choices continue to rise relative to sales, the market should move toward more balanced conditions slowing the upward pressure on home prices.

The search for affordable options along with a potential boost from those looking for a rental property contributed to apartment condominium sales reaching a new all-time record high in the second quarter. Like row properties, this was possible thanks to the significant growth in new listings this quarter. The shift in supply pushed up the months of supply up above two months. However, conditions this year are still tighter than anything seen since 2014. The tight market conditions supported some of the highest quarterly price gains recorded since 2007, narrowing the spread from the record high prices set back in 2014. This segment of the market should not see the same degree of pullback in sales as the detached segment of the market, but it will remain sensitive to gains in supply, limiting the pace of price growth in the second half of the year.

Included Below Are a List of Homes for Sale in Calgary, Alberta 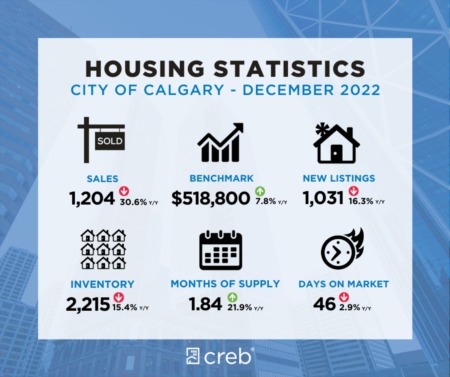 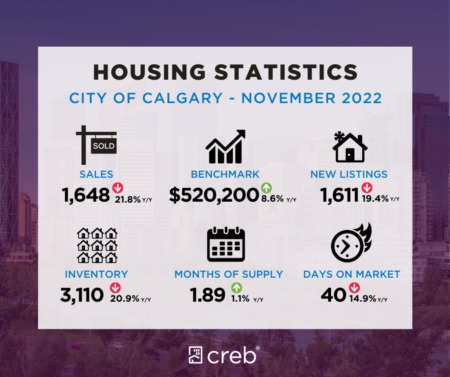 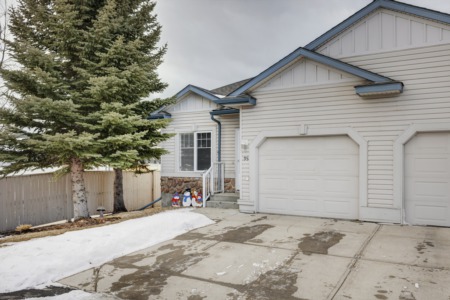 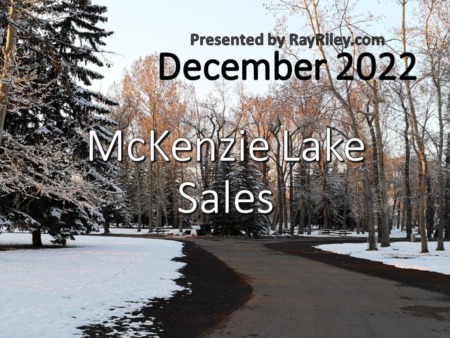